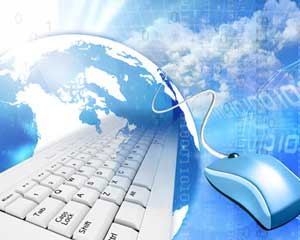 MAGNAGLOBAL, the strategic global media unit of Interpublic Group and division of IPG Mediabrands, recently released an updated Global Advertising Forecasts, showing media owners' revenue growth for 2011 and 2012 to be slower than previously projected, but still resilient. From MAGNAGLOBAL's +5.2% forecast published in June 2011, global growth has been revised slightly down to +4.7%, totaling $427 billion now, due to the softening of some markets in the second half of the year. The company is monitoring media suppliers' revenues in 63 major markets, representing more than 95% of the world's economy. Its media suppliers advertising revenue projection includes: television (pay and free), internet (search, display, video, mobile), newspapers, magazines, radio, cinema and out-of-home (traditional and digital) and excludes direct marketing categories such as direct mail or traditional "yellow page" directories.

The geography of growth

More than ever, emerging economies drove global advertising revenue growth in 2011, posting an average +15.0% growth during the year. Among these developing economies, Latin America posted the strongest growth rates, averaging +13.2%, closely followed by Central and Eastern Europe at +13.0%. Meanwhile, developed markets grew at much slower rates, such as +1.6% in Western Europe and +3.1% in North America, due to a number of factors including: a strong 2010 comparison, where revenues were up +8.2% compared to 2009; macro-economic slow down and persistent financial uncertainties; the absence of major sporting events or US elections; and natural disasters in Asia. Among individual countries, the strongest growth rates came from: Argentina with +37.9% in the context of a strong inflationary economic growth, China (+22.5%), Kazakhstan (+25.6%), Russia (+20.4%), India (+15%) and Brazil (+10.2%).

Eleven countries, out of the 63 analyzed by MAGNAGLOBAL, suffered a decline in advertising revenues, including countries in Southern Europe hit by protracted economic turmoil and political instability, such as Greece: -19.3%; Portugal: -6.9%; Spain: -6.3%; Italy: -2.5%; as well as emerging markets temporarily destabilized by the Arab Spring (Egypt -21%); and Asian countries hit natural disasters (Japan -2.0%, Thailand: -2.0%). Many of the large markets of Western Europe and North America wound up in the middle, typically showing low single-digit growth (UK: +1.8%; Germany: +3.0%; US: +2.9%).

Among media categories, television, an unexpected winner in 2010 (+12.7%), continued to show strength in 2011, despite the absence of cyclical sporting events or elections in the US. Broadcasters' advertising revenues grew 4.8% to $175 billion, in 2011, maintaining TV's leadership with a 41.0% market share globally. Good audience levels and audience measurement improvements such as the integration of time-shifted DVR viewing into ratings for the first time (e.g. France) made the medium attractive. Out-of-home (OOH) media fared even better: including cinema, OOH grew 6.4% globally, driven by the incremental revenues generated through digital billboards (+19.9%), which have rolled out in various parts of continental Europe and Asia. Other traditional media categories, however, had a tougher year. Radio grew only +2.2%; newspapers revenues were down -2.4% and magazines declined -0.9%. Declining circulation, shrinking readership, internet competition and short term media buying patterns (which penalizes monthly magazines), all contributed to print's decline in developed markets. Things are different in emerging markets, however, where literacy is still increasing and broadband access is still relatively low. In those markets, magazines are growing along with the middle class, and there is enough advertising demand for every media to benefit beyond TV. Overall, print advertising revenues are up by a high single digit percent in emerging markets.

Overall, coming after a strong 2010 and in a poor macro-economic context, media suppliers displayed a resilient performance in 2011. But the global market is barely back to where it was in 2007 ($423 billion in constant USD), and still smaller in the case of Western Europe (2007: $112 billion, 2011: $106 billion). This reflects that media costs that are still low from a historical perspective.

For 2012, MAGNAGLOBAL now forecasts media owners' advertising revenues to grow by 5.0% to $449 billion, which is 1.5% below their previous prediction published in June 2011 (6.5%), due to deteriorating macro-economic perspectives. Their forecast model is based on current, official economic forecasts that are generally predicting weaker - but still positive - growth next year. Uncertainty, however, remains high, especially in Europe. In September, the IMF reduced its global output forecast (real GDP growth) from +4.5% to +4.0%. Although that forecast suggests the world economy would still grow, it's an awkward average between emerging economies that are growing at healthy rates and developed economies that are still sputtering (average: +1.9%, US: +1.8%). In late November, the OECD revised its own global output forecast to +3.4% (including +1.6% for OECD countries and only +0.2% for the Euro area) warning that 4Q11 and 1Q12 could tip negative in most European countries, in line with a 3Q11 slowdown. Greece, Italy and Portugal, in particular, are now expected to suffer full-year recessions in 2012. Other economic indicators, such as industrial production, personal consumption and business confidence, have been similarly downgraded in recent months and some independent forecasters have expressed increasingly gloomier views.

Despite the worsening economic outlook, MAGNAGLOBAL is still projecting a positive growth rate based on a few factors:

In 2012, advertising revenues will grow by 12.4% in emerging economies, with Latin America still leading the charge (+13.0%) followed by Central and Eastern Europe (slowing down at +7.7%). Asia Pacific will re-accelerate to 8.3% due to the recovery of Japan and the continued growth of China. Western Europe will slow down at +1.1%. The sports driver will not be enough to offset recession in many European countries: Greece, Portugal, Spain, Ireland will decrease again (between -2% and -6%); Italy and France will be flat at best. UK and Germany will grow below 2%.

In terms of media market share, internet will grow by 11.2% and outrank newspapers to become the second biggest media category globally, accounting for nearly 20% of global advertising dollars (19.5% at $87.4 billion). The category already stands at 23% in both North America and Western Europe - where it even takes the #1 spot in a few markets, such as the UK.

Television will receive the bulk of the "quadrennial" bonanza and benefits from the typical concentration of advertisers into leading media at the expense of secondary media during harsh times. TV will grow by 6.7% globally to $187 billion.

Newspaper and magazine revenues will shrink by an average -1% and -1.3% respectively, with much deeper drops in Western markets, where circulation losses of 2011 will be reflected in 2012 ad pricing.

Radio will grow by 2.2% to $30.4 billion. OOH will also benefit from the "quadrennial" events and the roll-out of new digital (+6.3% to $28.3 billion) platforms. In the UK, the innovative upfront auction process conducted last summer to allocate the most premium London inventory during the Games did not quite meet the high expectations, but the industry is still expected to grow healthily next year.

China's advertising market is expected to continue outperforming its already impressive economic growth in 2012, with +16.1% growth. At $33 billion, China will become the second biggest advertising market, ahead of Japan, now third at $32.1 billion. Germany remains the fourth biggest market, some distance behind ($25 billion). Other top 10 markets are - in the following order - UK, France, Brazil, Canada, Australia and Italy. Russia will enter the top 10 in 2013, at the expense of Italy. 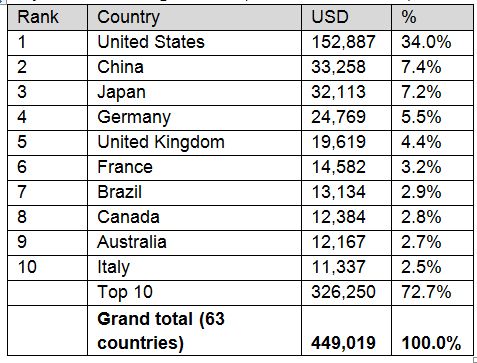 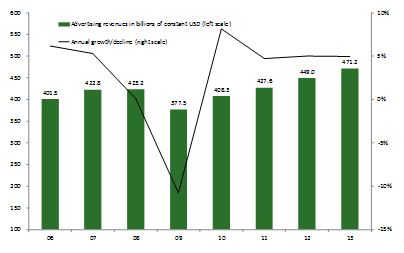 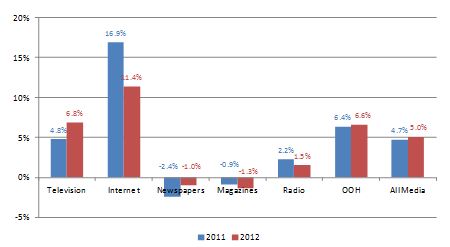