With recent reports predicting that the Asia Pacific region will see the largest growth in smart city initiatives over the next 10 years, many have focused on the cost saving benefits and efficiencies that technology can deliver. In fact, a recent report predicted the number of smart cities worldwide to quadruple over the next ten years, with Asia Pacific expected to see the highest number of smart cities, reaching 32 by 2025, ahead of Europe and the Americas.

Gartner defines a “smart city” as an urbanized area where multiple sectors cooperate to achieve sustainable outcomes through the analysis of contextual, real-time information shared among sector-specific information and operational technology systems. The technology research and advisory firm estimates that smart cities will account for more than 1.1 billion Internet of Things (IoT) items this year (2015), rising to 9.7 billion by 2020.

This raises the question if smart cities can be safer places for people to live and work, and what role does the advancement of technology and IoT have to play in delivering public safety?

To find the answers, Hitachi Data Systems Corporation (HDS) conducted a survey of delegates at the Safe Cities Asia conference in Singapore in May 2015. The event provided the right sample base to identify the role that technology is currently playing when it comes to delivering safer cities.

The results of the HDS survey have been extremely revealing. Nearly 90% of respondents said that either they or their organisations had already been involved in a safety project. Moreover, 69% of respondents are planning to invest in public safety projects in their countries over the next two years.

Making municipalities safer for people to live and work in is clearly the primary concern of those involved in smart city planning:

• 44% of those surveyed expect their countries to invest more than US$100 million in public safety initiatives over the next two years. Of those investments, 24% are expected to be allocated toward surveillance technology, with 19% earmarked for big data analytics, and another 19% for mobile and network technology.
• Public and community safety ranked as respondents’ top priority, followed by transportation and urban infrastructure, and the advancement of Internet or IT capabilities.
• Crime investigation, transportation and traffic services, as well as cyber security, were the top three public safety issues that respondents felt their countries had struggled with.
• A lack of alignment between government agencies was selected as the top factor that was holding back the implementation of public safety projects.

Tony Field, senior director of Hitachi Data Systems’ Social Innovation Business Unit for Asia Pacific, commented, “The survey results highlight that many Asia Pacific countries are looking to implement technology solutions that can have a meaningful, measurable impact on public safety. While a willingness to invest in such solutions is apparent among respondents, the main barrier appears to be a failure to adopt an aligned and integrated approach to safety initiatives, which would allow cities to create a single holistic view of crime in their cities.”

Hence, the secret to creating smarter and safer cities is not to work a little harder in a few specific areas. The real solution is to stop looking at each of these safe city components in isolation. To be truly effective, a municipality should view and manage all of the various parts together holistically. This allows each piece of the smart city puzzle to support the others. Moreover, by taking an integrated approach and employing more comprehensive analytics, the potential benefits multiply tremendously.

“Cities that fail to take a holistic, fully integrated approach to planning for the future are likely to remain stuck with the problems of the past”, the report concludes.

The whitepaper “Can smart cities also be safer cities” from Hitachi Data Systems offers in-depth analysis of the survey findings, and focuses on adoption barriers that prevent full implementation of public safety initiatives and real-world solutions that are helping to create smarter and safer cities. 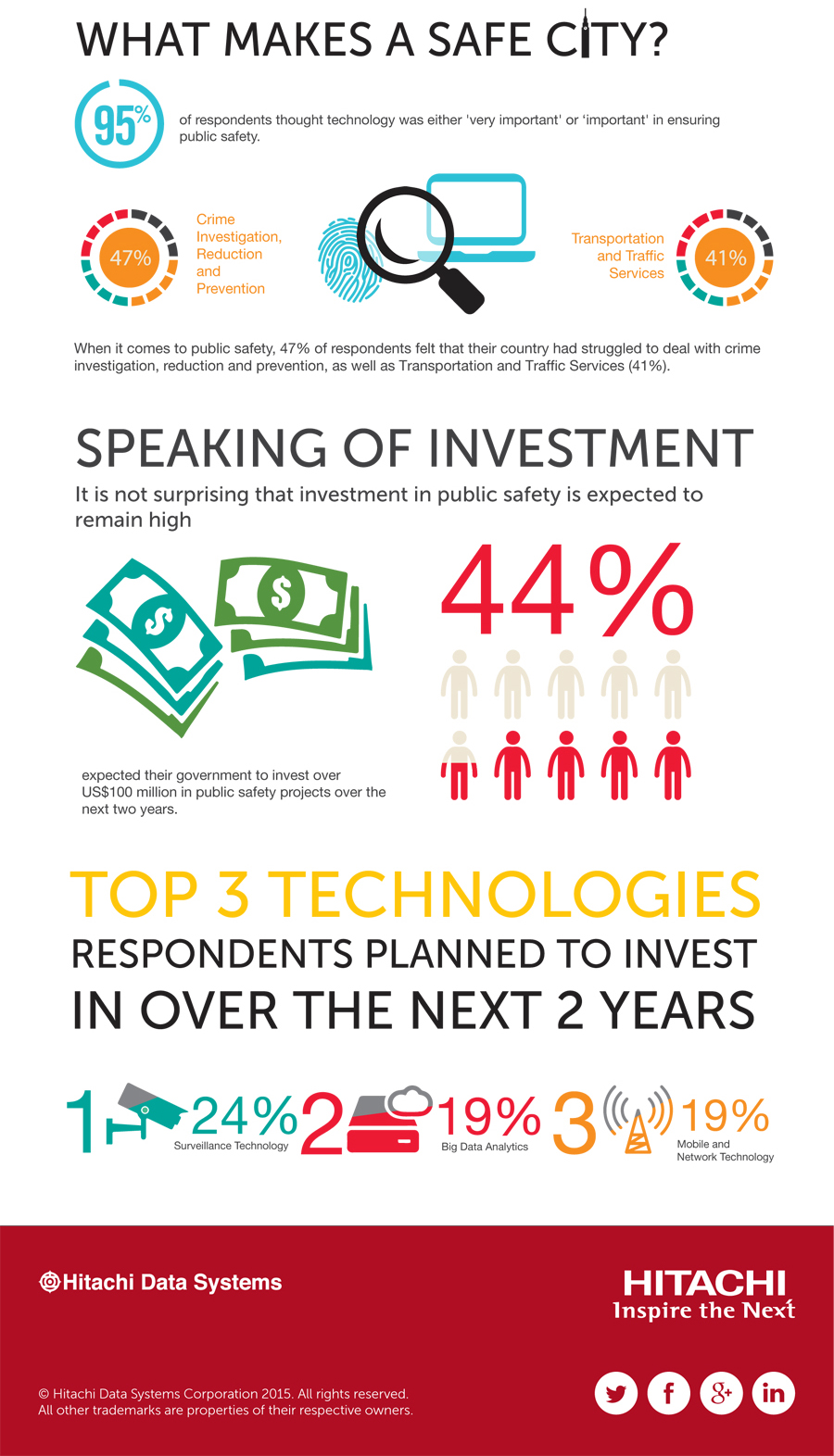