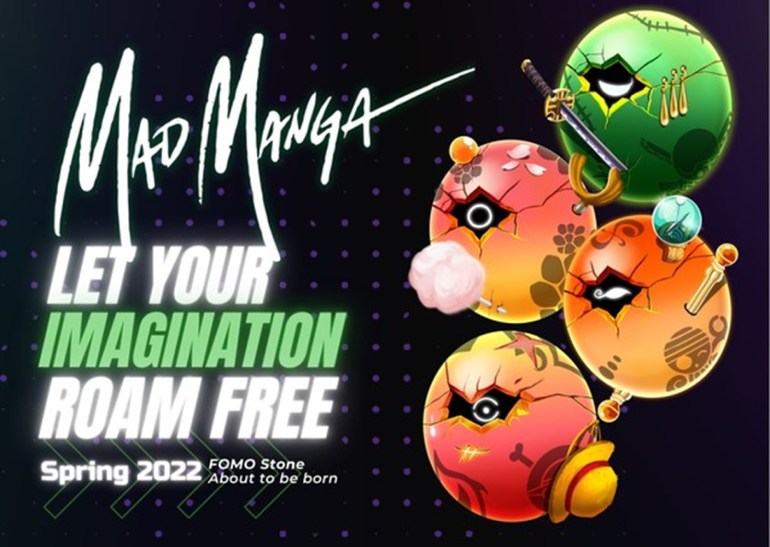 MadManga will launch its first-ever manga-focused NFT (Non-Fungible Token) series this spring, with each series consisting of a collection of chapters. FOMO Stones will be the beginning of an unprecedented and exciting genesis to the MadManga adventure. The FOMO Stone NFT will be the first of its kind, empowering and bringing together manga fans and creators.

The team behind MadManga is a professionally diverse group originating from around the globe, with members hailing from the US, EU, UK, and Japan, as well as talents from other Asian countries, combining their backgrounds gained in the anime-manga-gaming spaces, copyright, multinational event curation, physical products, blockchain and visual technologies. The team has by now established close and collaborative working relationships with IPs such as "One Piece"," Naruto", "Barbie", as well as "Disney" and "Warner Bros.," among other brands.

MadManga NFTs will be presented chapter by chapter, with FOMO Stone as the sole entry point to the MadManga universe and its full content collection. From the birth of a unique creature within each FOMO Stone, as the rewarding adventure series unfolds, the project will offer many opportunities for holders at various stages of the project's development for its utilities to unleash through planned business cooperation and other endeavors in line with the team's area of expertise.

Project holders can directly participate, contribute and make story decisions in the future of this unique manga-based brand that will subsequently become a web3 manga series, and they can even watch it on their favorite streaming services.

The goal of the project is to act as a bridge between manga fans and creators, to bring fans blood-pumping content, as well as to provide creators the freest of creative spaces. MadManga, in addition to creating a manga series masterpiece, will function as the incubator, to combine and incorporate popular and classic manga, games, metaverses and other top Ips. It will utilize multimedia content, anime figures, fashion culture, merchandises and exhibitions in both online and offline scenarios, vastly adding longer-term values for both creators and lovers of MadManga NFT holders.

The FOMO Stone NFT series is scheduled to be rolled out in phases starting this spring, with the goal of becoming the largest manga creation community on the blockchain. The series will be introduced on MadManga's official website and traded on OpenSea, the world's largest NFT marketplace. In addition, MadManga is partnering up with Galler.io, a new multi-chain decentralized NFT exchange platform, which is in the process of building what is expected to have unique mechanisms to reward its users. This collaboration is to deliver more benefits and long-term support to the supporters of the MadManga FOMO Stone NFT series. (Source: MadManga)