Cart abandonment emails are one way for retailers to get their message in front of consumers and get them to act, states eMarketer in one of its recent reports.

Presenting data from SaleCycle’s ‘The Remarketing Report – Q3 2015’, eMarketer reveals that when retailers send email notifications about abandoned carts, they have a whopping 40.5% open rate.

Interestingly, this result is about twice as high as what was reported for general retail emails in North America on the Experian Marketing Services network in Q2.

Click rates for cart abandonment emails were also significantly higher and the click-to-purchase rate reached 28.7% compared to 2.5% reported by Experian. 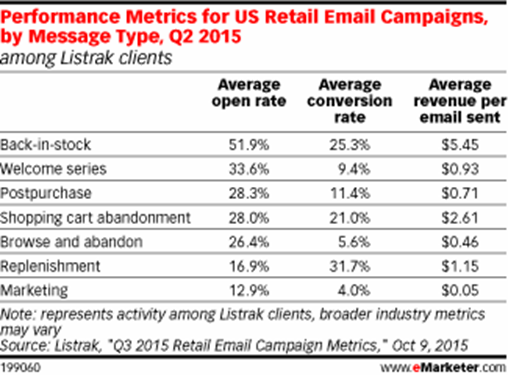 Listrak reported as well that people of all stages still use and act on email, revealing that conversion rates were high, and average revenue per email was $2.61, compared to more than $8 reported by SaleCycle. That was a higher ROI than any other type of email examined by Listrak other than back-in-stock notifications.

Some research suggests that when people abandon shopping carts, it’s because they just don’t want to buy, but high open and click-to-purchase rates for abandonment emails suggest many do plan to complete their conversion, and can be spurred to do so with a push message. 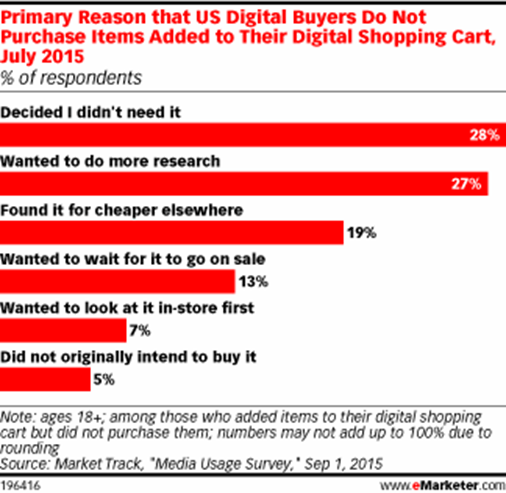 According to Bizrate, for instance, 18% of digital shoppers in North America who browse a retailer's site intend to buy, but end up not making a purchase, abandoning their shopping cart. In the UK, according to Royal Mail Group, almost all digital buyers abandon their shopping carts at least sometimes, and 26% of women and 16% of men do so frequently.

Perhaps frustratingly for retailers, the top reason, according to Market Track, is that shoppers simply decide they don't want the item all that much. That's what 28% of US digital buyers said their primary reason was for not buying something in their cart, followed by 27% who wanted to do more research.

Shopping cart abandonment obviously is a fact of life for online retailers. Bizrate's research found that saving items to buy later was still a factor in so-called abandoned shopping carts, and that many people could be easily prodded into pushing the buy button with a promotional email, or even just a reminder. Retailers have options when it comes to bringing back cart-abandoners, including retargeting with display and email, eMarketer concludes.