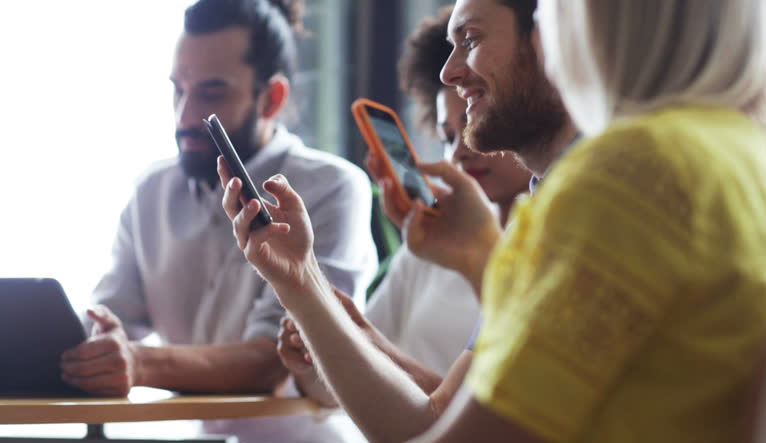 New global research from Irdeto revealed that second screens are now becoming ‘first screens’ in living rooms across the globe, as laptops and smartphones are outpacing that of set-top boxes (STBs) and smart TVs in the connected living rooms of today.

The research also found that security and user experience are the key demands for consumers in Australia and Singapore, with most ranking the security of payment details stored on devices (88% in Singapore, 87% in Australia) and the security of personal information (90% in Singapore, 88% in Australia) as either very or fairly important. Furthermore, 84% in Singapore and 79% in Australia said a good user experience from channel providers would be important.
Most characteristic of Singapore, however, is the fact that smartphones infiltrate the living rooms of the Island States’ citizens. While smartphone penetration and usage is high in all markets surveyed, they are the most used living room devices in Singapore (56%) and the most likely device purchase in the next five years (49%). Compared to Singapore, only 36% of consumers in the U.K, 32% in the U.S, and 30% in Australia identified smartphones as the device they use most in the living room. Furthermore, only 27% of U.K. respondents and 33% in both the U.S. and Australia plan to buy a smartphone in the next five years.

“The traditional living room viewing experience is clearly evolving and will continue to do so over the next five years, further increasing the importance of a secure and compelling multi-screen offering for operators and OTT players,” said Richard Scott, Senior Vice President, Sales and Marketing, Irdeto. “By harnessing the power of consumer insights, they will be able to tailor content and services to customers based on their changing viewing habits and device usage, and avoid losing customers in an increasingly competitive marketplace.” 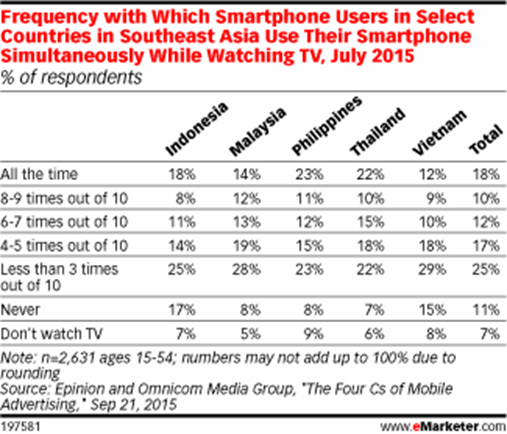 Emarketer got also granular on the topic and just reported that across five countries in Southeast Asia, more than eight in ten smartphone owners use their device in conjunction with TV viewing at least sometimes.

While the largest share of smartphone activities were program-related, there was also a solid amount of ad-related activity reported, although around 7% do not watch TV at all.

The survey, conducted by Epinion and Omnicom Media Group in July 2015, further shows that another 11% of the respondents never use their mobile devices while watching. The rest—including a high of 87% in Thailand and a low of 76% in Indonesia—simultaneously use their smartphone while watching TV at least once in a while.

Overall, 47% of respondents reported that this activity primarily involved them looking something up on their phone related to the program they were watching. That accounted for a plurality of those polled, but a robust 28% of respondents said they mostly used the phone for purposes related to the ads they saw on TV. The remainder were primarily using their phones for purposes unrelated to what they were watching.

Nearly half of respondents who conducted ad-related activities said they searched for a brand or product, while 36% shared brands or products with friends and 17% responded directly to brands. Two-thirds of respondents said they shared or searched for info about ads, because they saw a new product or brand, or because there was a promotion or sale going on. Of course, humor helped as well, along with unique product claims.

Without doubt, Irdeto is absolutely right to highlight to operators and OTT players the importance of harnessing the power of consumer insights so that they can tailor content and services to customers. With their studies, both Irdeto and Emarketer.com highlight that listening and responding to customers is crucial, considering their changing viewing habits and device usage, to avoid losing them in an increasingly competitive marketplace.