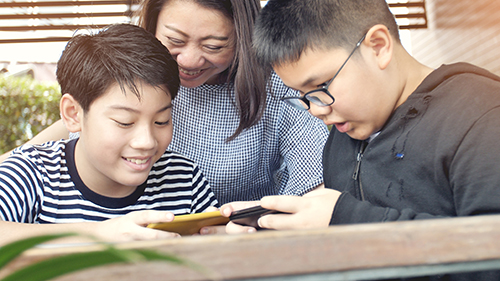 Games, played on a mobile device using localization technology like GPS, are called location-based (mobile) games. These are not only played on mobile hardware but also integrate the player's position into the game concept. In other words, while it does not matter for a normal mobile game where exactly the player is (play them anywhere at any time), the player's coordinates and movement are the main elements in a location-based mobile game.

A well-known example is the treasure hunt game Geocaching, which can be played on any mobile device with integrated or external GPS receiver. It is a kind of pervasive game in which the gameplay evolves and progresses via a player's location. So, some mechanism must be provided to allow the player to report their location, for instance, by using satellite positioning through GPS. Some games use embedded mobile technologies such as near field communication (NFC), Bluetooth, and ultra-wideband (UWB). The widespread adoption of mobile devices with GPS and powerful processors has enabled developers to explore new types of gameplays that blend the digital and analog worlds.

Digitaltrends lists some of the best location-based games including the following:

Pokémon Go has provoked legions of gamers all over the world to get off their butts and explore their surroundings, but it certainly didn’t come out of a vacuum. Developer Niantic (founded in 2010 as a Google subsidy) released Ingress in 2012, which was the biggest location-based mobile game then. Players are divided into two competing factions of “agents” that struggle for control over “portals,” which correspond to real-world points of interest much like Pokémon Go‘s Pokéstops and gyms. Triangulating three portals gives control over the bounded area to that faction, earning them points for as long as the area is held. The narrative frame for Ingress is a sci-fi scenario wherein a newly discovered form of Exotic Matter (XM) sparks a heated division about how it should be used for humanity. Because of their direct relationship, Ingress shares a lot in common with Pokémon Go, but the former features more robust game and social elements, along with a passionate community that has already invested years. The game has changed a lot over the years, so much so that the developers decided to rename the entire project to Ingress Prime. Ingress and Pokémon Go boast exercise as a secondary benefit of gameplay but don’t quite provide the same direct motivation as a horde of zombies nipping at your heels. As the name implies, Zombies, Run! is an “exergame” that provides a mission and reward structure as motivation for jogging. With more than one million players, its website boasts that the title is the most popular fitness game ever for smartphones. While zombies might be a bit played out in pop culture, it’s hard to argue that the theme doesn’t fit the game’s activity perfectly. The game has more than 200 missions and a base-building metagame, too, which should help even the most reluctant runners stay committed.

Pikmin Bloom is also from the same studio that brought you Pokémon Go. It doesn’t have the same player base as the ultra-popular game, but pikmin fans will find a lot to get excited about with the latest augmented reality (AR) experience. The relaxing game has you walking around your neighborhood to grow your squad of pikmin. The quirky creatures hatch out of seedlings you’ll acquire as you play, and after a few weeks, you’ll have a whole army following you around wherever you go. It’s not as deep as some other GPS-based games, but the casual adventure is a great way to get outside and relax. One of the few high-profile AR games not developed by Niantic is The Witcher: Monster Slayer, where you are tracking monsters using Witcher Senses. The narrative driving the action isn’t quite as deep as the main Witcher games, but it still draws from the same lore and offers hundreds of hours of gameplay. Unlike other games on this list, geocaching isn’t a discrete product from a particular developer, but rather a huge, community-driven activity. In many ways, it’s the ancestor of all these other location-based games, since it started in 2000 when the GPS standard was first opened to the wider public. Participants hide GPS-enabled containers all over the world and then other people use the coordinates to find them and see what they contain. At a minimum, they contain a logbook that players sign, but some contain more exciting secrets. Community standards dictate that if players find something in a cache, they replace it with something of equal or greater value.