Atmel’s formula for success: We don’t market, we support and inspire!

Aligning people, processes, technology and culture is crucial to drive transformation and boost sales, and no one seems to understand how to do it better than Sander Arts, Vice President Marketing of Atmel, who I met for an interview at the EmTech Asia event last month.

Sander presented on stage how he and his team used social media in an innovative way to raise awareness for Atmel by embracing the ‘Maker Movement’ and the community of Arduino enthusiasts, considering that an Arduino board consists historically nonetheless of an Atmel 8-, 16- or 32-bit AVR microcontroller, although some other makers' microcontrollers are used by now.

Arduino boards are available commercially in preassembled form, or as do-it-yourself kits and the hardware design specifications are openly available, allowing the Arduino boards to be manufactured by anyone for building digital devices and interactive objects that can sense and control objects in the physical world.

Atmel’s marketing team targeted exactly this group of people when they launched the company’s blog Bits & Pieces, providing its users a platform for crowdfunding their projects, exchanging ideas and getting attention. As a result, Atmel’s blog receives 3.5 million visits per month and has as many blog post shares as all other 39 competitive semiconductor companies combined, besides having 60,000 loyal followers on Twitter.

Technology only comes to life when it is touched by people 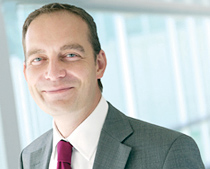 All this success could be gained by putting the spotlight on the Makers Movement, startups and hobby-innovators, reporting on industry news and other cool things, rather than on technology and product marketing.

With the brilliant idea to help the millions of ‘makers’, by giving them marketing support and online visibility, Sander Arts wowed the Arduino enthusiasts and pocketed marketing success for Atmel. Since many of them use the open source Arduino platforms for their creations and Atmel’s microcontrollers (MCUs) are powering nearly every Arduino board on the market today, the ‘makers’ stick with Atmel and are not going with competitors.

“I just looked at how people engaged with our technology. They loved it, because it is easy to use and accessible, and we celebrate that”, Sander explained. “We started to write about crazy stuff, like e.g. an Arduino-powered fish feeder, and by now the content is pouring in and we get fed with stories from our many followers. It is the authenticity that is convincing”, he added.

Different from its competitors, Atmel inspires and encourages its millions of digital followers and users of Arduino by providing a platform that supports ‘Makers’ to market their inventions or tell their stories besides transferring them to Atmel’s professional integrated development platform. Not least Atmel’s easy-to-use 8-, 16- or 32-bit MCUs are powering the worldwide ‘Maker’ communities, encouraging engineers, professionals and hobbyists to kick-start their latest projects from smart and securely connected devices for the Internet of Things (IoT), to robotics, thermostats, 3D printers or other new innovations. Certainly the Arduino online community is huge, too, especially since these microcontrollers are relatively cheap and readily available for hobbyists.

As said, the whole movement is driven by Arduino, the open-source software tool that makes interactive objects sense and control the physical world. On stage, Sander Arts talked vividly about a few innovative projects that showcased how Atmel MCUs are used by entrepreneurs, inventors, engineers and even children to turn ideas into real working things. He said: “It’s simply because Atmel MCUs perfectly complement Arduino and the needs of makers, by delivering a unique combination of performance, power efficiency and design flexibility.”

Power to the people

Fully aware of the fact that a long-term view is crucial to get the most out of the latest technologies, since it is necessary to adapt to trends and new developments, Sander Arts ignited the company’s cultural change by deciding to go beyond adapting business processes and realigned business priorities completely. He combined strategic, tactical and cultural changes to make advances to customers and partners, while keeping in perspective how success is measured.

In addition, to simplify the design process, the new platform is compatible with Atmel's flagship Studio 7, an easy-to-use and complete integrated development environment, along with Atmel Start, the world's first intuitive web-based platform for software configuration and code generation. And although microcontrollers, like the Arduino, are easy to program they can only help to create the Internet of Things when combined with the cloud. Hence, the cloud itself is a basic tool in service of the maker movement, enabling increased collaboration, digital workflow, distributed manufacturing and a collaborative economy.

As Capgemini Consulting once explained to the point in its whitepaper Digital Transformation: A Road-Map for Billion-Dollar Organizations: “Successful digital transformation comes not from creating a new organization, but from reshaping the organization to take advantage of valuable existing strategic assets in new ways. The key is to re-envision and drive change in how the company operates. That’s a management and people challenge, not just a technology one.” Isn’t that’s exactly what Atmel did?

The company took advantage of social media to understand customer satisfiers and dis-satisfiers, and at the same time promoted the Atmel brand more effectively through the digital channel. The trick was not to sell the firm’s products directly, instead the strategy was to align the stories Atmel told closely with the firm’s reputation. Sander Arts’ goal was to build loyalty with clients in the industry and to promote microprocessors in an online community of startups, IT enthusiasts and hobbyists.

He envisioned possibilities that cross organizational and technological silos, besides making sure that effective communication and governance is in place to move into the right direction. In a broader sense, digital transformation replaced a limited one-way vertical communication with broad communication channels that are both vertical and horizontal. The tools that virtualize individual work, while implemented for cost reasons, have become powerful enablers for knowledge sharing.

Sander proved that one-off digital tactics and a short-term views aren’t enough, instead business leaders must take a fresh look at all facets of their own organizations – the people, processes, technology and culture – and see if they are aligned and optimized for the digital age.