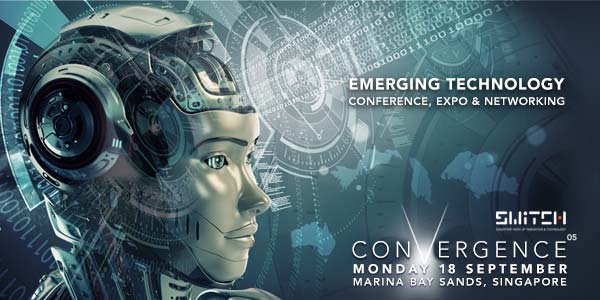 The convergence of emerging technology is changing the consumer landscape and Convergence 005 | SWITCH will focus exactly on that – the consumer revolution that is driven by the latest emerging technologies such as Augmented Reality (AR), Virtual Reality (VR), Mixed Reality (MR), Artificial Intelligence (AI), Machine Learning / M2M, Wearable Technology, 3D Printing, Robotics & Drones, the Internet of Things (IoT), and FinTech / Finance Innovation.
The event will deliver a high impact conference and trade show and provide a unique blend of conference learning, trade show research and cross-industry networking.

Held in conjunction with SWITCH (Singapore Week of Innovation & TeCHnology), a platform that showcases the best ideas, technology and innovation the world has to offer, you can expect to learn a lot when joining the event on Monday 18 September 2017 (11am - 5pm) at the iconic Marina Bay Sands convention center.

Through a series of events held between 18 -21 September 2017, SWITCH brings together the best minds to create exchanges that will shape our world. At SWITCH, interactions are the coin of the realm, taking into consideration that at the end of the day, not technology shapes our future, but we do. Hence, conference speakers, include:

Robert Scoble, a futurist, author, blogger, entrepreneur, who interviewed thousands of executives and technology innovators and reports what he learned in his books, such as "The Fourth Transformation" or "The Age of Context". which he co-authored with Shel Israel. Robert is active on YouTube and many social media sites where he's followed by millions of people. As entrepreneur in residence at Upload VR, he spent 2016 working with the virtual reality ecosystem to figure out what media and conference businesses Upload needs to build next. He also assisted start-ups in the Upload Collective (a co-working space) in their efforts to get to market. Building online communities since 1985, he started a technology blog in 2000 that got the ball rolling. From 2003-2006 he worked at Microsoft as an evangelist and has been one of the five guys who started Microsoft's famous Channel9 video community.