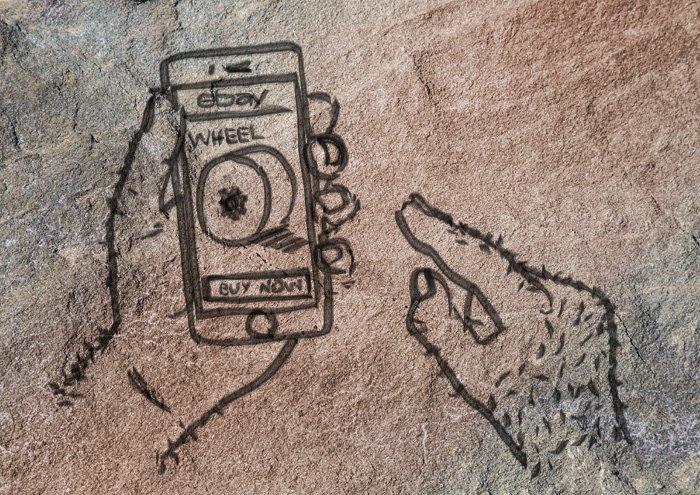 Over 2400 years ago, Plato told a story of a group of people chained up in a cave facing a blank wall. His famed ‘Allegory of the Cave’ depicted a world where a group of prisoners was entertained only by shadows from the light of the fire behind them. This flickering view of silhouettes became their sole reality.

When one was freed, he turned his back on the wall and was temporarily blinded by the light of the fire. Once he recovered, he became curious enough to leave the cave and experience a superior, yet incomprehensible, new world.

He returned to the cave wanting to share his experience but, now accustomed to the sun, was blinded by the darkness. The prisoners believed that whatever existed outside the cave caused his blindness and, in their ignorance, refused to be dragged from their cave.

2400 years later, could this ‘cave’ metaphor be applied to how we’ve adapted to our new digital world?

Many businesses believe they’re ‘forward-thinking’ and have escaped the ‘cave’ of analogue to ‘see the light’ of digital – but the question begs: have we even left the cave yet? Or have we only made it as far away from the wall as the fire? We might ‘think’ we’ve escaped the cave, but if we understood what’s really possible, we’d realise we have a long way to go before we can truly call ourselves ‘freed’ of analogue.

Fast forward to 2013, when DreamWorks created a beautiful 3D animated film called ‘The Croods’. It too tells the story of a cave-dwelling family. They are governed by an overprotective and stubborn patriarch, Grug, who refuses to believe that life outside of the family cave can ever be safe.

His curious teenage daughter, Eep, is coaxed out of the cave by a torch of fire, where she meets an inventive and forward-thinking boy named Guy, who warns her of an impending apocalypse. Grug, fearful of change, is not convinced by this ‘different’ and ‘new’ way of thinking, and bans Eep from seeing Guy.

When a massive earthquake destroys their cave, they’re forced to flee their home. With their lives irreparably disrupted, Grug has no choice but to listen to Guy and allow him to guide his family to the safety of a mountain, where Grug retreats to his old ways of thinking and insists that his family hide out in a new cave. His family refuse, saying they don’t want to ‘survive’ but to ‘live’ in a new, safe land that Guy calls ‘Tomorrow’, a place where a person’s curiosity is allowed to flourish.

Certainly, engineering is one of the last bastions of analogue. We’re making incremental steps forward but, compared to other sectors, we probably haven’t left the cave yet. Even though digital technologies are generally seen as enabling collaboration on design projects or infrastructure management and optimisation, there are still trust issues around sharing information between partners due to legacy contractual structures, IP concerns and data security. We’re suspicious, and we prefer the comfort of what we know.

Is there ever a ‘right’ time to leave the cave?

We’d all prefer to be Guy rather than Grug, but we’d also like to know what ‘Tomorrow’ looks like before we make our metaphorical move there. We also know that with something as invisible as digitisation, that’s impossible.

If we think of the freed prisoner as a dot-com pioneer or early digital adopter, who was temporarily burnt by his experience, then his fellow prisoners are his peers, who vowed never to fall into the same trap. They stayed in the cave, while he ventured back into the sunlight and carried on exploring and learning about the new digital horizons.

Today, his extensive knowledge of both the analogue cave and the digital new world gives him a significant advantage over his peers who, unless they change, risk certain extinction.

You have to know how to step out of the cave

The Johari Window model is a very useful tool for gaining even more self-awareness, which we can adapt to look at our blind spots of knowledge. Let’s call it the Four-roomed Johari Cave: 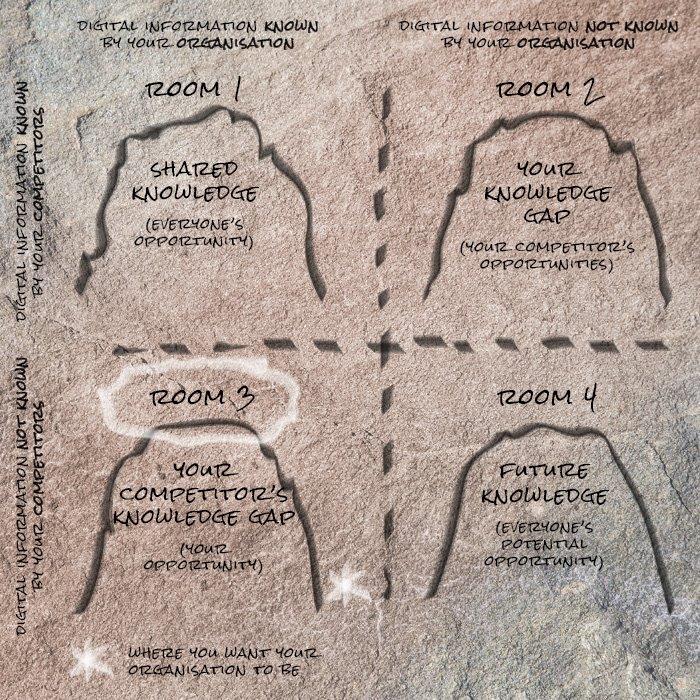 Clearly you and your organisation want to be residing in Room 3, where your extra digital knowledge can create opportunities that exist because of your competitors’ knowledge gaps.

You’ll also need to be up-to-date with everything that’s happening in Rooms 1 and 2, if you want to maintain your advantage and maximise your opportunities.

Yet, interestingly, Room 4 is the most important of all. It’s in here that the next, yet unwritten, chapter of our digital future will unfold. The best way to prepare your organisation for whatever comes next in the digital space is to place yourself as far away from Rooms 1 and 2 as possible, and as close to Room 4 as you can get (the * in the above diagram).

What’s lurking outside the cave?

The realisation of a built environment which is digitally enabled, monitored, responsive and optimised has the potential to be one of the defining developments of the 21st century.

Digital engineering has the potential to enable countries to realise not only all of the inherent value in building its infrastructure assets, but, more importantly, harnessing an ever growing body of data to better manage the assets through their life cycle. This becomes even more critical with the realisation that approximately 80% of the assets’ costs are incurred in the operational phase, dwarfing development costs.

There will be many complexities, some of them terrifying, such as new contractual models and data sharing, as we leave the cave behind. Governments looking to drive a digital economy and infrastructure for their nations need to realise that applying current day thinking to an unknown future simply won’t work. We have to understand that our knowledge is only beginning to form before we lock down ‘immovable’ strategy.

Our fear of the unknown is often our greatest fear. Yet, if Plato was still around today, he’d urge us to be more like Guy and less like Grug as we journey towards ‘Tomorrow’. Stepping into the digital light will require exploring the unknown and expanding our horizons – but at the very edge of the unknown, we’ll discover a new world exists.