PwC examined in a new report the impacts of three overlapping waves of automation - the algorithm, augmentation and autonomy wave. The research analyzed the tasks and skills involved in the jobs of over 200,000 workers across 29 countries in order to assess the potential impact of automation on workers in different industry sectors and of different genders, ages and education levels.

On average across the 29 countries covered, the share of jobs at potential high risk of automation is estimated to be only around 3% by the early 2020s, but this rises to almost 20% by the late 2020s, and around 30% by the mid-2030s.
The study suggests that more women could initially be impacted by the rise of automation, whereas men are more likely to feel the effects in the third wave by the mid-2030s (see table below). This is due to the types of tasks that are more susceptible to automation and the current gender profiles of employment by sector.

The table below summarizes estimates of the proportion of jobs that could be impacted over these three waves and how this might vary for male and female workers.

Source: PwC estimates of median values across 29 countries based on analysis of OECD PIAAC data

The estimated proportion of existing jobs with high potential automation rates by the mid-2030s varies significantly by country, ranging from only around 20-25% in some East Asian and Nordic economies with relatively high average education levels, to over 40% in Eastern European economies where industrial production, which tends to be easier to automate, still accounts for a relatively high share of total employment. Countries like the UK and the US, with services-dominated economies but also relatively long ‘tails’ of lower skilled workers, tend to have intermediate potential automation rates. 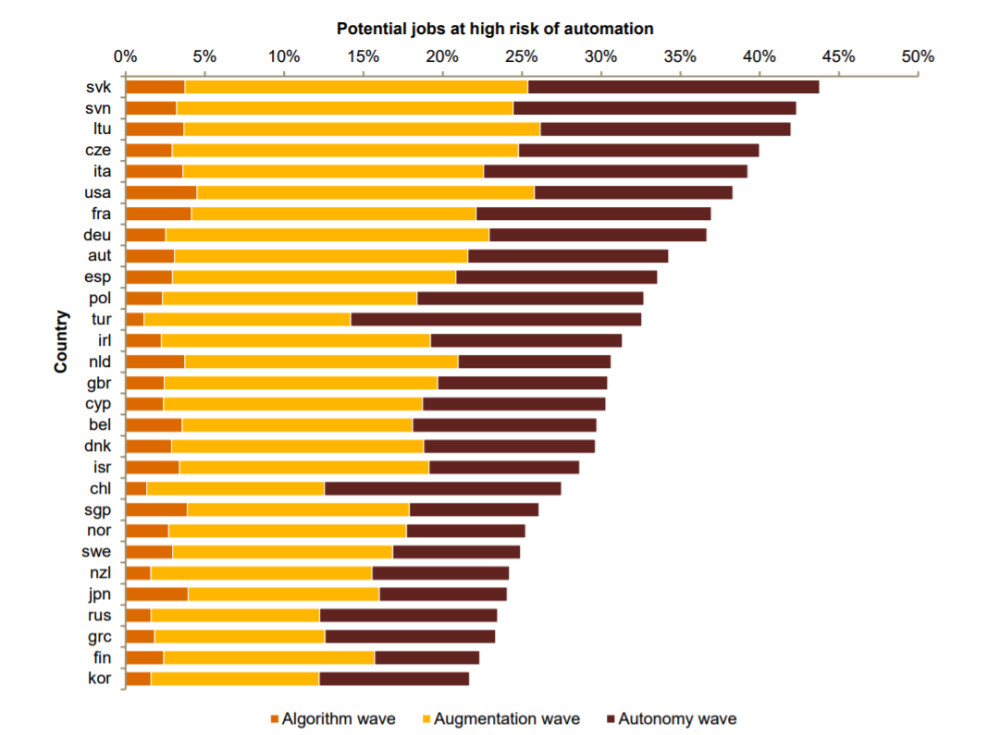 “AI will have dramatic implications on the workforce of the future, this is no different to previous industrial revolutions. As we look to the future, skills training will shift from hard skills such as more technical know-how to softer skills such as relational and problem-solving skills”, Mark Jansen, Data and Analytics Leader, PwC Singapore said.

The estimated share of existing jobs with potential high rates of automation by the mid-2030s varies widely across industry sectors, from a median across countries of 52% for transportation and storage to just 8% for the education sector.