Future impact of AR in marketing 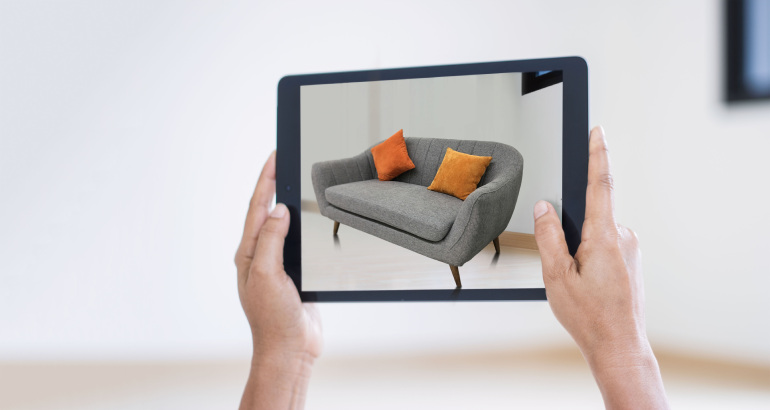 Augmented Reality (AR) has been talked about in marketing for years and there are already some exciting applications, so why do most marketers still believe that it is just expensive gadgetry?

Just look at the lifestyle brand Gucci, with a very exclusive target group, which already sells shoes via augmented reality on Snapchat. The Italians have certainly intensively evaluated which channel and which technology could be worthwhile whereby the number of 180 million people using AR on Snapchat were probably the decisive factor, besides the fact of easy handling with just a single swipe. In addition, AR is nowadays not only found in Snapchat, but also on Facebook, Instagram, YouTube, Google Maps, Google Search and in Android and iOS anyway.

Hence, there are plenty more examples which could revise preformed opinions on augmented reality:

Apple scans rooms and people: The iPhone 12 is all about augmented reality. Even before the official presentation, there was a lot of AR mystery to see, similar to the PlayStation 5. What the Americans then launched however, will definitely impact app developers intensively these days. We are talking about the LiDAR scanner, a 3D scanner that is part of the camera, which can use objects that it recognizes in order to map realistic proportions in the scan. The scanner knows that a coffee table is 40 cm high, a washing machine closer to 60 cm, so that it is possible to place products in the room, just like at IKEA or Amazon. But you can also measure a room or an object/person in the room, for example, which is a real useful application for AR in e-commerce.

Amazon integrates AR in product pages: as mentioned, after text, images and video, augmented reality is now included in the Amazon app as well. This may be trivial for household items, but when it comes to interior design or furniture, it starts to get interesting.

Sony is cagey about the PlayStation 5 (PS5) and has chosen a similar approach to Amazon for the presentation of the PS5—only the package is virtual. Sony publishes a Snapchat Lens that allows users to place the PS5 on their own living room table and take show-off screenshots of it. Several other brands have already done the same. In 2018, for instance, BMW collected ‘pictures’ of the X2 in a wide variety of scenarios, even though the car was not yet on the market.

Google brings AR into shopping: most people are familiar with Google's AR animals (if not, simply goggle the "Emperor Penguin" on your smartphone and look for the button "View in 3D"), but now Google is bringing the function to Google Shopping. With Volvo there is a demo case in which the AR view of the Volvo is not only used to look at the object of desire from all directions, but it can even be configured.

AR without any software: The makers of AugmentifyIt implement AR applications that run directly in the browser with relatively little effort. The user scans a QR code and reaches a landing page with AR phrases and all kinds of call-to-actions.

With expected revenue of up to $25 billion by 2025, the future of augmented reality seems to be bright. The gaming industry will remain the most relevant driver, but practical uses of AR such as those used by the healthcare, real estate and engineering industries will also gain traction.