New Clues: Personalization and native advertising are a thorn in the Internet community’s side 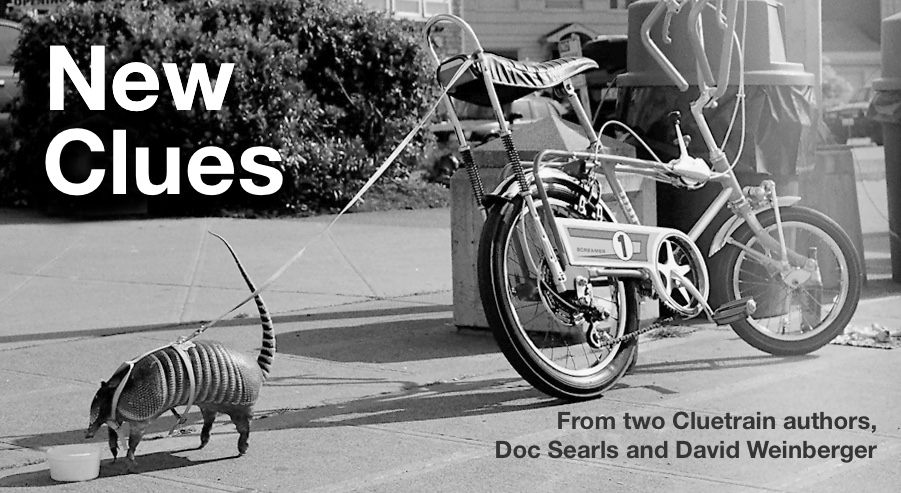 Published in 1999, the "Cluetrain Manifesto" got famous with its 95 theses on the relationship between companies and customers in the Internet age. Marketing seems to be able to learn from them a lot, since the assumptions take the words right out of many peoples’ mouths.

Two of the former authors, Doc Searls and David Weinberger, have now published the "New Clues" – 121 new theses on the values of the internet, expressing concerns, but also hope and love for the Internet society.

For the development of the business and marketing field, the authors find clear words. The basic thesis remains the same even after 15 years, namely “the Internet is free and open, and it should stay that way”, elaborating: “Verizon, Comcast, AT&T, Deutsche Telekom, and China Telecom do not own the Internet. Facebook, Google, and Amazon are not the Net’s monarchs, nor yet are their minions or algorithms. Not the governments of the Earth nor their Trade Associations have the consent of the networked to bestride the Net as sovereigns.”

Ownership play an important role in the first paragraphs of the "New Clues" stating: “The Net is of us, by us, and for us. The Internet is ours. No one owns that place. Everybody can use it. Anyone can improve it.”

The authors take a clear position as well regarding net neutrality, any kind of restriction, and interference from outside. “Thy network shall move all packets closer to their destinations without favor or delay based on origin, source, content, or intent” is the first commandment. Besides, the authors point out that the hate on the Internet was not there because of the Internet, but because there was hatred in the world that can be easier expressed and listened to online.

What the "New Clues" mean to marketers

For the authors, markets and businesses are conversations, hence, the one and same theory as in the "Cluetrain Manifesto". Thus, talks are proceeding not only in one direction, further products and ads that are imposed on network users are not a conversation and therefore fundamentally unacceptable.

The authors admit that the talks on the Internet are of great value for marketing purposes, but since companies do not own the conversations, they have to keep their hands of them. Yet, the authors do not demonize the intervention and participation of enterprises per se, but say it should be obvious, for whom and on whose behalf this is done, stating: “Every time you call us “consumers”, we feel like cows looking up the word “meat.”

The "New Clues" are about a human, personal level. It is said loud and clear, that stealing information to analyze it are exactly against this belief. Pretended humanity in the form of a "pseudo-personal approach" besmears the net, according to the authors:  “Personal is human. Personalized is not. When personalizing something comes across creepy, it’s a pretty good indication that you don’t understand what it means to be a person.”

Even regarding native advertising the authors have a clear opinion, saying it would undermine the own credibility and demonstrating a low point of cooperation. For them, native advertising is nothing but an often veiled "product placement": “When you place a “native ad,” you’re eroding not just your own trustworthiness, but the trustworthiness of this entire new way of being with one another. And, by the way, how about calling “native ads” by any of their real names: “product placement,” “advertorial” or “fake news”?”

Apps, copyright, and a bit of philosophy

For the authors, apps are a danger because they circumcise their way into the open net and represent only a small, insular part. “Web pages are about connecting. Apps are about control. As we move from the Web to an app-based world, we lose the commons we were building together. In the Kingdom of Apps, we are users, not makers.”

Regarding copyrights and privacy issues, the authors express their opinion as well: “The Web is barely out of its teens. We are at the beginning, not the end of the privacy story. We can only figure out what it means to have privacy once we figure out what it means to be social. And we’ve barely begun to re-invent that. We have a culture that defaults to sharing and laws that default to copyright. Copyright has its place, but when in doubt, open it up”

Further, the online manners are a thorn in the "New Clues" side in general. In a kind of modern version of the Kantian categorical imperative, the authors establish the universal rule: “Live the values you want the Internet to promote“.

You can read the entire original Cluetrain Manifesto, in addition to taking a look at the list of “New Clues” mentioned above by clicking these links.