Mobile Broadband Outstrips Fixed Broadband, But Does Not Replace It 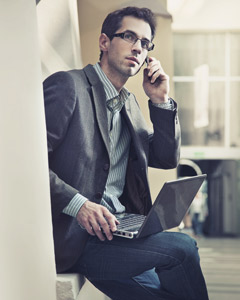 By the end of 2015 mobile broadband will swamp fixed broadband subscriptions by more than 300%. A startling statistic, but not one that should overly concern fixed broadband operators. Fixed broadband is not as susceptible to fixed-to-mobile substitution as fixed voice was, and growth opportunities are still possible in the fixed broadband market.

By 2015 there will be approximately 3.2 billion mobile broadband subscriptions worldwide, a huge figure when compared to the 785 million fixed broadband subscriptions at the same point in time. Although such significant growth cannot fail to impact the fixed broadband market, this should certainly not be seen as a doom scenario. During the next five years the global fixed broadband market will continue to grow by a compound annual growth rate of 7%. By 2015, on a worldwide basis, 36% of homes will have a fixed broadband subscription. Twenty-five percent of these homes will be served by optical fiber technology, and a further 18% by hybrid-fiber coax (HFC). HFC networks are increasingly being upgraded to DOCSIS 3.0 technology, and thus an increasing portion of such customers will also be able to receive advanced, high-bandwidth services into the home. By 2015 most developed countries will see fixed broadband household penetration of over 60%, and the vast majority will not see any decline due to mobile substitution during this time period.

From a fixed broadband perspective, this does stem potential growth. In emerging markets, fixed broadband household penetration is on average more likely to be below 30% by 2015, compared to being above 60% for the more developed markets. In countries such as India it will be below 10%. However, even for fixed broadband operators such countries still represent good growth potential. Regions such as South and Central America, Eastern Europe, and Middle East and Africa all have a greater CAGR over the next five years than developed markets, which have now largely reached saturation point.

The future may be wireless, but fixed broadband will play a key role

Indeed, all around the world, developed and emerging markets alike are exploring and deploying new FTTH/B networks, with many countries seeing such investment as being a critical factor to their future social and economic success. If such investment and deployments continue to come to fruition, and an increasing number of homes become connected to this new optical fiber based network, then the world could see a new surge in fixed broadband subscriptions.