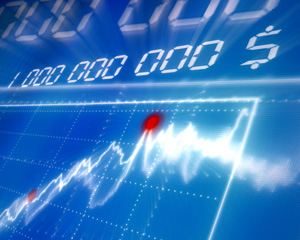 According to Deloitte, social networks will most probably surpass the breathtaking milestone of one billion unique members in 2011 and deliver over two trillion advertisements, implying advertising revenues of about $5 billion.

Despite social media’s large and growing audience, its advertising revenues represent less than one percent of the worldwide advertising spend total and may remain relatively modest compared to other media, at least in the short term. Other sources of social network revenues, such as payment systems and e-commerce, might exhibit faster growth.

It seems, therefore, that social networks’ long-term market value will continue to polarize opinions in 2011, with some looking at it as the technology sector’s “next big thing”, promising even greater rewards than the decade-old phenomenon of search advertising. Others compare social networks to the dot-com bubble and argue that monetizing their users at dollar levels similar to online search has not yet been demonstrated.

Deloitte’s view is that the advertising revenues from social networks in 2011 are likely to be very significant in absolute terms: total industry revenues of $5 billion dollars and year-over-year growth of 40 percent are impressive numbers; individual companies may experience even higher growth rates. Yet, revenues on a per-subscriber basis are unlikely to match search or traditional media in the next year or two. Also, advertising rates, measured on a CPM (cost per thousand impressions) basis, are likely to remain low compared to other forms of online advertising as well as traditional media.

Nevertheless, thanks to a low cost base, social networks might still achieve impressive gross margins despite their relatively low revenue-per-user - particularly when compared to the traditional media companies that they are competing against. A social network’s cost of content is close to zero since it merely provides the infrastructure, while its users and third party app developers provide all the content.
An assessment of social networks’ potential hinges on three metrics: subscriber growth, time spent on the network, and CPMs. Many social networking companies have been recording impressive gains in some of these metrics, but it is worth examining how much additional growth they can achieve.

When social networks attain the billion unique user milestone, nearly half of one global user base – computer-based Internet users - may be signed up by year-end 2011. This could put a ceiling on future growth if global Internet adoption continues to expand at the pace that consensus analysts expect. So, it might be increasingly difficult for social networks to sustain their impressive subscriber growth trajectories. However, as smart phones and 3G networks become more widespread, the base of active social network users should rise accordingly, particularly in developing countries where mobile penetration continues to rise steadily.

If social networks’ advertising revenues are only worth $4 billion in 2011 with half the potential user base already signed up, or if future growth is largely restricted to the low-value mobile ad market, most of the upside for social networks would need to come from increased time spent on the network, which rose sharply in 2010, or from improved CPM metrics.

If there are limits to audience growth and time spent, then the burden would primarily fall on CPM to drive revenue growth. Social networks’ understanding of individuals’ backgrounds, preferences, social groups, activities, and behaviours are without equal. So, there have been hopes that this would enable social networks to deliver superior advertising results, but paradoxically, social network CPMs have remained among the lowest of all forms of online advertising. That could well change, as the ability to mine the myriad of data on social networks may find new business models that allow for much higher advertising revenues. For 2011, however, it is difficult to find the levers that would cause social network ad revenues to further accelerate from their already rapid pace.

Perhaps the vastness of social networks’ repository of user information is itself a limiting factor; as of 2011, it remains a challenge to economically extract useful insights from the volumes of user data that social networks generate. The billions of stated “likes” may not all necessarily signal an intention to purchase. Also, in 2011, as in previous years, privacy concerns may constrain the ability to collect the most valuable data. Nevertheless, once social networks figure out how to rapidly and economically analyze their data, and to monetize the billions of recommendations made, a new seam of valuable customer insights will be available to mine and exploit.

In 2011, social networks will definitely remain an emerging business founded on innovation; yet they have already achieved levels of market acceptance that might have seemed inconceivable just a few years ago. The question now is whether social networks can sustain their growth trajectory and find better ways to monetize value.

Even if social networks 2011 ad revenues only meet industry forecasts, they may still have other valuable ways to generate revenue. For example, they could serve as a payment platform for the hundreds of thousands of application providers in their ecosystem. Or they could adopt a blended e-commerce department store model, where they charge for online floor space and earn a commission on any sales.

Advertising firms and their clients, for instance, will likely need to expand their use of social media to protect their image and reputation in a world increasingly influenced by personal opinions and grassroots communications. Studies have shown that word-of-mouth feedback and peer reviews exert tremendous influence on purchasing decisions; in fact, one survey found that up to 78 percent of people trust peer recommendations, compared to just 14 percent who trust advertisements. Thus, agencies might begin pushing other forms of advertising or decide to sell high value advisory services, such as public relations and reputation management, to help a brand manage its presence on social networks.

Yet in 2011 these additional revenue streams, although very profitable, are unlikely to surpass advertising in importance to social networks (see figure below). 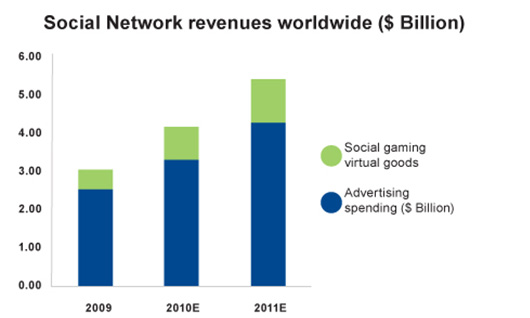 Source: Deloitte Touche Tohmatsu Limited, 2010, based on data from eMarketer and NextUP Research

Throughout 2011, it seems likely that the forecast for the social network sector will continue to be promising, but unclear. As more information is released and as business models become more developed, all advertisers, competitors and analysts will get a better picture of the future potential of this industry.