According to one of eMarketer’s latest studies, total media spending will grow most quickly in Indonesia this year.

Asia-Pacific will remain the fastest-growing region of the global economy over the next two years, according to the International Monetary Fund, driven by expanding manufacturing sectors that serve international markets, as well as a burgeoning middle class that has helped to increase domestic consumption.

Positive trend in ad spending for the region

Despite differences in economic growth projections among Asia-Pacific’s constituent countries, the overall trend in ad spending for the region is a positive one. eMarketer expects that spending on all measured media in Asia-Pacific will reach $152.00 billion in 2014—a 6.3% year-over-year increase. 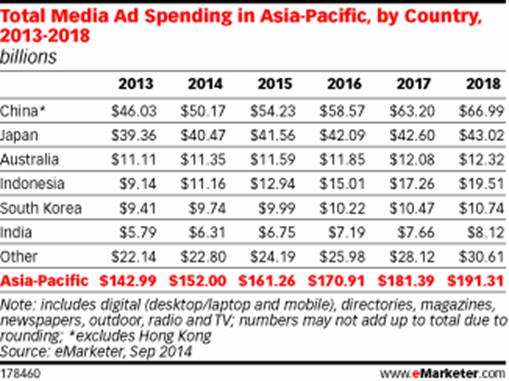 Overall, the region will account for more than one-quarter (27.9%) of global ad spend this year, behind only North America’s 35.6%.

eMarketer estimates that Indonesia, India and China will boast Asia-Pacific’s highest growth rates in ad spending, led by Indonesia with 22.0%. All three countries are expected to sustain rates higher than the regional average through 2018.

ZenithOptimedia’s “Advertising Expenditure Forecasts,” updated in June 2014, was in general accordance with eMarketer’s projections, estimating that ad spending in the region would increase by 6.5% year over year in 2014.

ZenithOptimedia also predicted an increase in the growth rate each year through 2016, noting that an “economic recovery in Western Europe leads to better trading conditions and higher corporate confidence.” The firm projected that annual ad spending growth for the region would increase to 7.4% in 2015 and 8.1% in 2016. 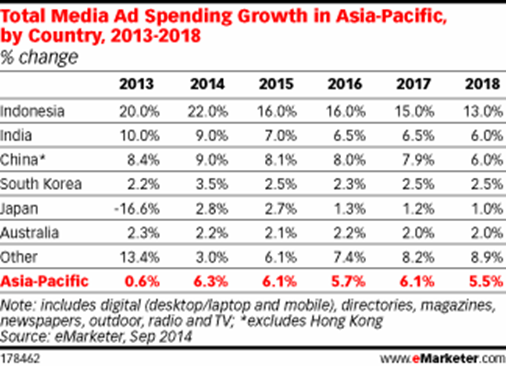 China will remain Asia-Pacific’s leader in digital advertising this year, accounting for 45.9% of all regional expenditures, worth $18.96 billion. Despite its economic concerns, Japan will spend the second-highest amount on digital advertising in the region, at $9.19 billion. Overall, digital ad spending in Asia-Pacific will reach $41.33 billion this year—an 18.3% increase over 2013. Of the core countries covered by eMarketer in the region, Indonesia will remain the least developed market for digital advertising through 2016, but is expected to surpass India in 2017 and then pull away from that country rapidly in 2018.

Digital advertising outlays in many of these markets are constrained by low internet penetration in many areas across Asia-Pacific. There are wide differences in web access among these countries, and sometimes even within them. For instance, the internet is more commonly accessed in large cities in China, India and Indonesia than in rural areas that lack the requisite infrastructure. Despite these limitations, eMarketer estimates that there will be 1.33 billion people in Asia-Pacific who access the internet at least once per month in 2014. 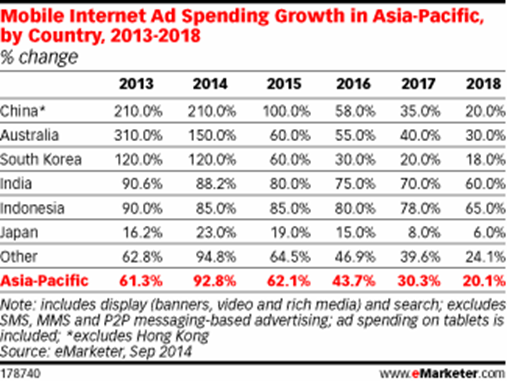 China won’t be the only country in Asia-Pacific enjoying triple-digit growth in mobile internet ad spending this year. Advertisers in Australia will spend 150.0% more on mobile internet ads this year than last year, and in South Korea, growth will reach 120.0%.

Spending levels will almost double in India and Indonesia as well. Only in Japan will growth rates be significantly lower, at 23.0% this year.

China’s rapid growth—and the massive size of the country and its mobile population—have helped turn it into the No. 1 market in the region for mobile internet advertising. More than one-third of all mobile internet ad dollars in Asia-Pacific will be spent in China this year. That leapfrogs the country ahead of Japan for the first time—a country which, up until last year, gobbled almost half of mobile internet ad spending in the entire region.

eMarketer estimates that this year, mobile internet ad spending will account for 20.2% of all digital ad spending in Asia-Pacific and 5.5% of total media ad investments in the region. Spending will pass $8.36 billion this year and come in at more than $25.38 billion by 2017.

eMarketer bases all of its forecasts on a multipronged approach that focuses on both worldwide and local trends in the economy, technology and population, along with company-, product-, country- and demographic-specific trends, and trends in specific consumer behaviors. We analyze quantitative and qualitative data from a variety of research firms, government agencies, media outlets and company reports, weighting each piece of information based on methodology and soundness.

In addition, every element of each eMarketer forecast fits within the larger matrix of all its forecasts, with the same assumptions and general framework used to project figures in a wide variety of areas. Regular re-evaluation of each forecast means those assumptions and framework are constantly updated to reflect new market developments and other trends.