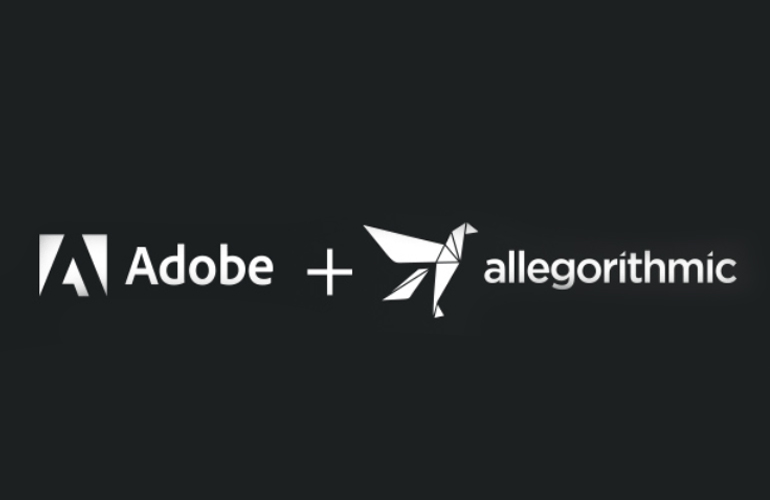 Adobe just announced its acquisition of Allegorithmic, a leading 3D editing and authoring company that set standards in the gaming and entertainment industry.

Substance is a concept developed by Allegorithmic and consists of a higher level of abstraction descriptor of 3D models’ material properties. Substance can encode customizable texture maps as well as procedural functionalities affecting the overall material result. In Substance Painter, Allegorithmic introduced, for instance, the power of physical simulation, which greatly simplifies the creation of weathered materials, providing artists and designers with a tool that saves them time they can invest in their creative expression instead.

After their triumphal procession in the gaming industry, it is actually no surprise that Allegorithmic’s tools were rapidly spreading to film, design, product visualization and marketing, thanks to massive time and cost savings they provide. Gaming and VFX are simply the leading industries for high-end 3D visualization, since the final product is digital and moving to 3D has been a necessity.

By proving the prognosis that we will live in a world where real and virtual creations will blend in the future, Adobe counts on compelling, interactive experiences - enabled by 3D content, VR and AR – and is convinced that these technology trends will become most critical for brands to stand out and differentiate themselves from competitors.

3D content is already transforming traditional workflows into fully immersive and digital ones that save time, reduce cost and open new creative horizons. Adobe states. With the acquisition of Allegorithmic, Adobe takes now a powerful step forward in adding expanded 3D and immersive workflows to Creative Cloud and provides Adobe’s core customer base of designers a new set of tools for 3D projects.

“We are seeing an increasing appetite from customers to leverage 3D technology across media, entertainment, retail and marketing to design and deliver fully immersive experiences,” said Scott Belsky, chief product officer and executive vice president, Creative Cloud, Adobe. “Creative Cloud is the creativity platform for all, and Substance products are a natural complement to existing Creative Cloud apps that are used in the creation of immersive content, including Photoshop, Dimension, After Effects and Project Aero.”

Allegorithmic is based in France and has a diverse customer base across gaming, film and television, ecommerce, retail, automotive, architecture, design and advertising industries, including leading creative brands like Electronic Arts, Ubisoft, BMW, Ikea, Louis Vuitton, and more.

Allegorithmic is the recognized leader in 3D material and texture authoring for most AAA gaming franchises, including Call of Duty, Assassin’s Creed and Forza, and the tools used in the making of award-winning movies, including Blade Runner 2049, Pacific Rim Uprising and Tomb Raider.

“Allegorithmic and Adobe share the same passion for bringing inspiring technologies to creators,” said Sebastien Deguy, CEO and founder, Allegorithmic. “We are excited to join the team, bring together the strength of Allegorithmic’s industry-leading tools with the Creative Cloud platform and transform the way businesses create powerful, interactive content and experiences.”

Hence, expect to see more innovations emerge in other industries that are traditionally focused on physical products and product design. With Allegorithmic’s tools, companies will leverage the 3D models of their products across the entire customer experience – from e-commerce content to marketing material, from catalogues to immersive experiences.