The newest version of the award winning video encoding software features a new, unique HTML5 publishing tool to streamline playback across multiple screens, from smartphones to desktops or TV. 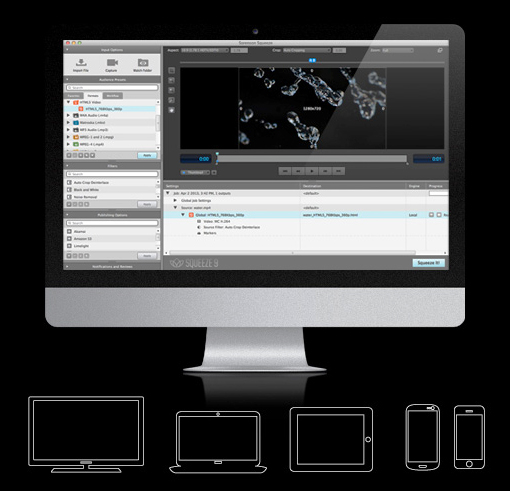 Users simply drag and drop a single HTML5 pre-set onto a source file, and Squeeze then automatically creates two output renditions of the file—one in MP4, the other in WebM— together with an elegant coding of the video onto an HTML5 web page, using the HTML5 is growing in popularity across the Internet and our users have been asking for ways to simplify the optimization of video for the various browsers and multi-screen delivery,” said Mitch Holyoak, vice president of engineering for Sorenson Media. “With Sorenson Squeeze 9, our primary goal was to innovate the overall user experience by stripping away barriers to a streamlined workflow, so that video professionals can forget about transcoding, and instead focus on their craft of video creation.”

Squeeze 9 also includes substantial enhancements to the user interface, the first major UI update since version 6 in 2009, which work together to streamline the workflow interactions and processes within Squeeze.

The UI improvements include:

Another major workflow improvement in Squeeze 9 is video stitching. This new version enables users for the first time to add pre- or post-roll video to any primary video. This enables more efficient workflows, especially with regard to appending ads of all types, to source material passing through the encode phase of production.

Other improvements in Squeeze 9 include:

“We have refined the application from top to bottom to create the easiest-to-use, most feature-rich, fastest and highest-quality version of Squeeze ever developed for video professionals everywhere, from independent enthusiasts to enterprise developers,” said Peter Csathy, CEO of Sorenson Media. “We made the best-reviewed, most cost-effective encoding and transcoding solution in the market even better by making it easier than ever before to publish video online.”