Google makes the Difference with Semantic Search and Knowledge Graph 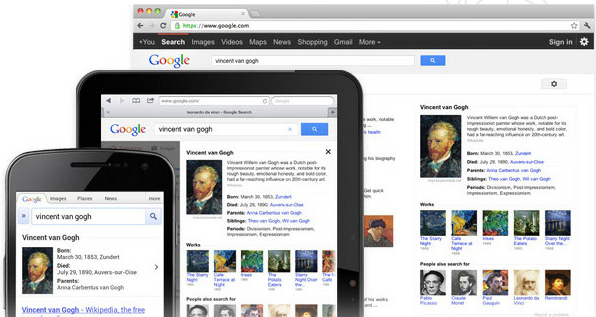 Semantic search changes the way a search engine "thinks" about a search term and is on the rise. I expect it to have a huge impact on the industry as a whole and therefore I decided to spend some time on the topic - not only because I am a philologist by education, but I am extremely impressed by the learning curve of search engines and the kind of human elements that are brought to machines.

Before semantic search came into the picture, Google provided results based solely on the text and the keywords that were entered into each search. Nowadays, however, Google uses artificial intelligence to understand the searcher’s intent and the meaning of the query rather than parsing through keywords like a dictionary and I think that‘s worth mentioning.

Rather than using ranking algorithms such as Google's PageRank to predict relevancy, semantic search uses semantics or the science of meaning in language, to produce highly relevant search results. In most cases, the goal is to deliver the information queried by a user rather than have a user sort through a list of loosely related keyword results.

Just take the word “orange” that can be identified as the fruit, the colour, the telecommunications operator, or just the city of Orange in California, besides many other meanings. Semantic search systems consider various points including context of search, location, intent, variation of words, synonyms, generalized and specialized queries, concept matching and natural language queries to provide relevant search results. The no.1 web search engine Google already incorporated semantics to improve search accuracy. By understanding searchers’ intent and the contextual meaning of terms as they appear in the searchable data space the company is able to generate more relevant results.

Google’s support system for semantic search is called Knowledge Graph and makes up a critical first step towards building the next generation of search. It taps into the collective intelligence of the Web and understands the world a bit more like people do, helping eliminate the need for re-querying and providing disambiguation.

Although semantic search isn’t actually a new concept - already in 2008 search engines started to focus on natural language over keywords - we’re, however, only taking notice of it now because of Google, which most probably seized the idea from Siri, Apple’s intelligent personal assistant and knowledge navigator.

The trailblazing step is the attempt to understand what a user is searching for. To do so, it is important to make use of other information present in a semantic analysis system and to take into account the meanings of other words present in the sentence and in the rest of the text. The determination of every meaning, in substance, influences the disambiguation of the others, until a situation of maximum plausibility and coherence is reached for the sentence. All the fundamental information for the disambiguation process, i.e. all the knowledge used by the system, is represented in the form of a semantic network, organized on a conceptual basis. In a structure of this type, every lexical concept coincides therefore with a semantic network node and is linked to others by specific semantic relationships in a hierarchical and hereditary structure. In this way, each concept is enriched with the characteristics and meaning of the nearby nodes.Once a searcher has narrowed things down, Google provides a fact summary that contains valuable information and useful links.

With Knowledge Graph, Google will now be answering questions itself, instead of relying on another website to provide the information.  So, not only will you have to be competing with companies for ranking, exposure and clicks in Google, but you’re competing against Google itself.

So far, keywords have been easy to manipulate, but to rank well in semantic search, you don’t just have to put your keywords in the right places, you have to figure out the actual meaning behind those keywords and create content around that specifically. Thus, keyword research in semantic search will have to focus on what that person actually means when searching for that keyword.

As you may know, the term “semantic Web” was coined by Tim Berners-Lee, the inventor of the World Wide Web, who defined it as "a web of data that can be processed directly and indirectly by machines". He described the evolution of the existing Web to the semantic Web perfectly, envisioning that information can be readily interpreted and understood by machines, so machines can perform more of the tedious work involved in finding, combining, and acting upon information on the Web and especially responding to complex human requests based on their meaning.

He is also the one who pointed out the challenges that have to be considered before we can proceed:

Vastness: The World Wide Web contains many billions of pages, so any automated reasoning system will have to deal with truly huge inputs which is challenging;

Vagueness: Imprecise concepts like "young" or "tall" have to be considered in user queries, making a precise attribution quite difficult, especially when combining different knowledge bases with overlapping but subtly different concepts;

Uncertainty: These are precise concepts with uncertain values, which can be tackled with probabilistic reasoning techniques;

Inconsistency: These are logical contradictions which will inevitably arise during the development of large ontologies, but defeasible reasoning and para consistent reasoning are two techniques that probably help;
Deceit: When produced information is intentionally misleading the consumer, but cryptography techniques are currently utilized to alleviate this threat.

Google stated that they are planning to roll out Knowledge Graph gradually, aiming to overcome more and more of the challenges just mentioned. According to the zeitgeist, it will be available on smartphones and tablets soon as well. What else should I say? Google again makes the difference with its inspiring ventures. Thanks!