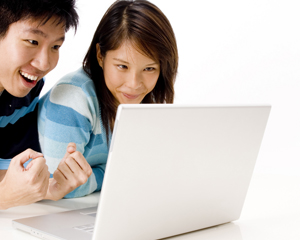 By 2014, close to half of all Internet users will live in Asia and it may surprise, but 70 percent of Asians already spend more than three hours a day online, watching more videos on the Internet than people in North America or Europe.

No wonder then that nowadays there is a pretty high expectation for Internet safety and security in the region as well. Actually, there has never been a greater need for an immersive, high-performance browser that not only meets ever increasing demands, but opens the window to the Web of tomorrow.

Microsoft’s new Internet Explorer 9 (IE9) promises users to get to their online destination faster and with a richer, safer and highly enjoyable experience.

IE9 enables a more immersive, more beautiful Web experience with features such as Pinned Sites and Jump List, that allows its users to put their websites directly on the Windows 7 Taskbar, as though they were native applications, and then to quickly and easily perform tasks related to those websites, such as check their inboxes, change the music station, accept friend invitations or see breaking news.

The new Internet Explorer also takes advantage of the power of modern Windows PC hardware to improve all-around Web browsing performance. It is the only browser with hardware-accelerated HTML5 spanning all graphics, text, audio and video. Internet Explorer 9 harnesses the power of the Graphics Processing Unit (GPU), unlocking 90 percent of the PC’s power that went previously untapped by Web browsers. In that way, developers get a chance to build faster, more immersive websites that feel like native applications using HTML5, as well as runtimes such as Adobe Flash Player and Microsoft Silverlight, both of which will take advantage of the hardware acceleration in Internet Explorer 9 in their next versions.

In December 2010, Microsoft introduced Tracking Protection in Internet Explorer 9, which puts people in control of what data they are sharing as they move around the Web, by enabling consumers to indicate what websites they’d prefer not to exchange information with. Consumers do this by adding Tracking Protection Lists to Internet Explorer 9, and partners such as PrivacyChoice, TRUSTe, Abine and Adblock Plus have already published these lists. Because the Web is increasingly less secure and private, Internet Explorer 9 is designed to be a trusted browser by containing a robust set of built-in security, privacy and reliability technologies that keep customers safer online.

Ryan Gavin, Senior Director, Windows Internet Explorer, at Microsoft, last but not least reminds us that: “What people care about on the Web is their sites, not their browser. That’s why Internet Explorer 9 is about making those sites shine. The browser is the theatre, and the sites people visit are the play, and that is what Internet Explorer 9 makes better - your favourite sites.”

Seems to me like Windows Internet Explorer 9 lives up to its expectations!