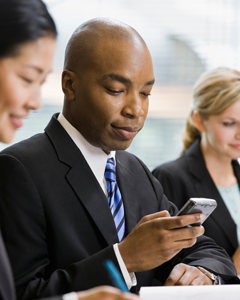 “RIM set out to engineer the best professional-grade tablet in the industry with cutting-edge hardware features and one of the world's most robust and flexible operating systems,” said Mike Lazaridis, President and Co-CEO at Research In Motion.  “The BlackBerry PlayBook solidly hits the mark with industry leading power, true multitasking, uncompromised web browsing and high performance multimedia.”

Its ultra thin design, measuring less than half an inch thick and weighing less than a pound, with a 7” high resolution display, provides a unique mix of utility, performance and portability, that leaves nothing to be desired.  Its groundbreaking performance is jointly fuelled by a 1 GHz dual-core processor and the new BlackBerry Tablet OS which supports true symmetric multiprocessing.  Together, the abundant processing power and highly sophisticated OS enable the BlackBerry PlayBook to provide users with true multitasking and a highly-responsive and fluid touch screen experience for apps and content services.

With support for Adobe® Flash® Player 10.1, Adobe® Mobile AIR® and HTML-5, the BlackBerry PlayBook provides customers with an uncompromised, high-fidelity web experience and offers them the ability to enjoy all of the sites, games and media on the web. For more than a decade, the mobile industry has worked to bridge the gap between the “real web” and mobile devices through various apps and technologies and, in fact, a significant number of mobile apps today still simply serve as a proxy for web content that already exists on the web.  The BlackBerry PlayBook closes that gap and brings the real, full web experience to mobile users while also opening new and more exciting opportunities for developers and content publishers.

It includes dual HD cameras for video capture and video conferencing that can both record HD video at the same time, and an HDMI-out port for presenting one's creations on external displays and offers rich stereo sound and a media player as well.

For those who carry a BlackBerry Smartphone, it will also be possible to pair their tablet and Smartphone using a secure Bluetooth® connection, which means they can interchangeably opt for the tablet or Smartphone display without worrying about syncing or duplicating data.

The BlackBerry PlayBook is enterprise ready and compatible (out-of-the-box).  It takes care of security and manageability issues that arise when corporate data is stored on yet another device, as it is built upon the QNX® Neutrino® microkernel architecture, one of the most reliable, secure and robust operating system architectures in the world.  The Neutrino based microkernel architecture in the BlackBerry Tablet OS delivers exceptional performance, high scalability, Common Criteria EAL 4+ security, and support for industry standard tools that are already familiar to hundreds of thousands of developers.  The OS is fully POSIX compliant enabling easy portability of C-based code, supports Open GL for 2D and 3D graphics intensive applications like gaming, and will run applications built in Adobe Mobile AIR as well as the new BlackBerry® WebWorks™ app and will therefore support Java enabling developers to easily bring their existing BlackBerry 6 Java applications to the BlackBerry Tablet OS environment.

The BlackBerry Tablet OS SDK is released and developers can register for early access at www.blackberry.com/developers/tabletos