In Singapore, detection of the most disruptive frauds, using suspicious activity monitoring, appear to be at a much higher level compared to global average, PwC’s survey shows. In fact, Singapore based organizations are embracing technology to detect fraud, indicating a more proactive approach in the fight against fraud.

Overall, the results have shown that more than one in three respondents in Singapore said their organizations had suffered fraud in the last two years (35%), up from 22% in 2016. Globally, the proportion of organizations reporting economic crime has also gone up from 36% in 2016 to 49% in 2018.

With the increased awareness and higher numbers of reported fraud incidences, investments to combat it have increased in tandem. In Singapore, results show that half of the organizations (51%) spent more on investigations and/or other interventions than what was lost through their most disruptive crime. This is significantly higher than the global average of 28%.

Facing the threat of fraud, organizations in Singapore are beefing up their internal controls, as corporate controls remain the top means of detecting the most disruptive economic crimes (54%), going up four percentage points from 2016. Many respondents also reported addressing fraud prevention through corporate culture initiatives through which 33% of the most disruptive frauds in Singapore based organizations were detected via tip offs or hotlines.

The survey also shows that organizations in Singapore are planning to invest in advanced technologies at a faster rate than their global counterparts (see PwC’s graph below). 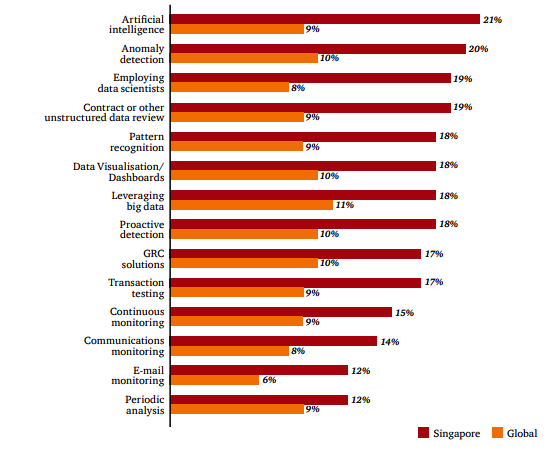 For more details, please read the full report.
PwC’s Global Economic Crime and Fraud Survey examined over 7200 respondents from 123 territories, of which 118 were from Singapore.