Fast growth in video viewing on desktop, laptop PCs, and more recently on mobile devices, has shifted a significant share of time spent with video to digital venues. In China, as in other markets around the world, internet time appears to be surpassing TV time, as more and more people go online and mobile becomes a majority activity, according to a new eMarketer report, “China Time Spent with Media: Digital Activities Fuel a Multiscreen Market.”

Digital video is a key driver of the shift

Internet use in China skews sharply toward entertainment, and video is a major part of the mix. TV content viewed via digital screens is widely popular, in part because restrictions on linear TV content have allowed digital publishers leeway to offer more attractive content.

A July 2014 A.T. Kearney survey found that internet users in China devoted 35% of their time online to “entertainment,” a far larger percentage than internet users elsewhere.

Digital video penetration rates are high among internet users in China as TNS’s “Connected Life” study reported confirmed, stating that nearly nine in 10 internet users in China were digital video viewers. However, a striking aspect of mobile video viewing in China is the prevalence of viewing long-form TV content. The Interactive Advertising Bureau found that 71% of smartphone/tablet owners in China watched full-length TV episodes at least weekly on their handsets, and 27% did this once a day or more—far more than their counterparts in the US. 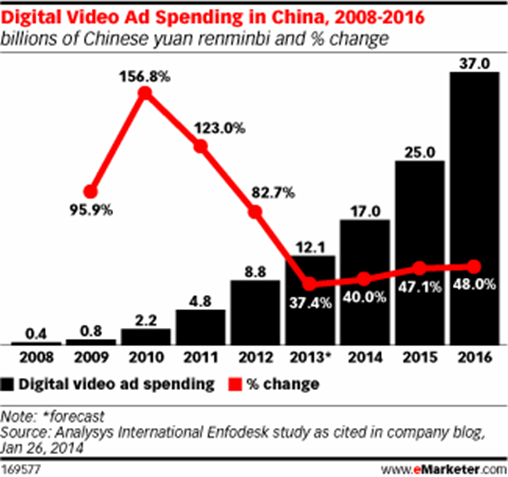 That’s a big jump from 2010, when advertisers in China had just begun to allocate money from their budgets to digital video, according to a new eMarketer report, “Digital Video Advertising in China: A Complex and Competitive Market.”

“The share of advertising spending on video is not proportionate to the time people in China spend on the medium,” said Wu Minghui, the founder and CTO of advertising technology provider Miaozhen Systems. “More of TV ad spending should flow to the internet, mostly to digital video. Digital video companies in China have as much quality content as TV channels have, and will probably have more than TV in the future.” 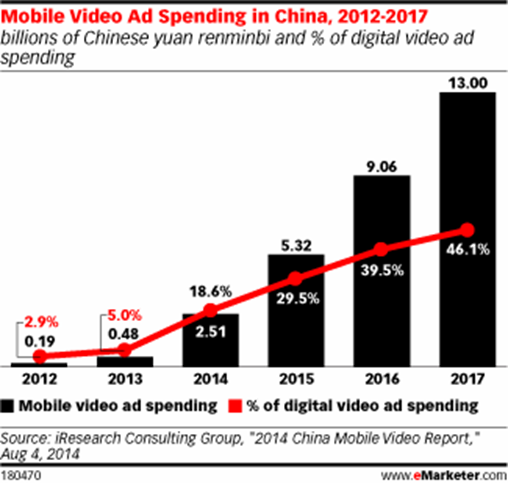 In research released in August 2014, iResearch Consulting Group forecast that marketers in China would spend RMB5.32 billion ($865.6 million) on mobile video ads in 2015—nearly one-third of the source’s projected expenditure for digital video. By 2017, mobile spending will reach nearly half of the digital video ad spending total.

The CPM for mobile devices is currently higher than it is for PCs. However, ad inventory on internet sites is scant, and the CPM for mobile video platforms is expected to decrease in the future. Minghui pointed out: “The video ads on mobile devices can be more engaging than those on PCs. A PC is a multitasking system, and consumers often have multiple windows open. Whenever they see a video ad, they can leave it there and quickly switch to do something else. It’s less likely that viewers skip the video on mobile devices.”

For marketers, high mobile video usage gives “opportunities to target consumers when they are on the go,” said Shann Biglione, head of strategy at ZenithOptimedia China. “The challenge for creatives is to explore new forms of mobile video ads.”