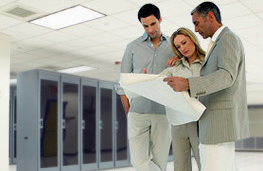 Enterprises are experiencing rapid growth in the data they can access and store, which is having a profound impact on how they invest in data centers. Therefore, in January 2014 Digital Realty commissioned Forrester Consulting to survey enterprises in the Asia-Pacific region about the drivers, priorities, and barriers behind their data center investment. The study surveyed 267 IT decision-makers from multinational corporations (MNCs) with presence in the Asia-Pacific region.

More importantly, these stakeholders expect applications to perform consistently within a secured computing environment, regardless of their geographical location when accessing the service.

Security concerns and the need for control may keep many facilities on-premises, but that isn’t necessarily the best solution.

Asia-Pacific firms are most concerned about risk profile and resilience when selecting data centers: 75% of respondents rated the level of control over their data center facility as an “important” or “very important” evaluation. With this in mind, it is not surprising that 38% of firms plan to locate their next data center within 100 miles of their headquarters.