Based on an April 2014 study conducted by Ipsos OTX for the Association of National Advertisers (ANA), the overwhelming majority of brands are now measuring their social media content effectiveness – or at least in the United States.

Social media provides brands with another channel for content sharing, but since it becomes the norm, content marketers are looking to the next step in the process, which is measuring the effectiveness of this content. 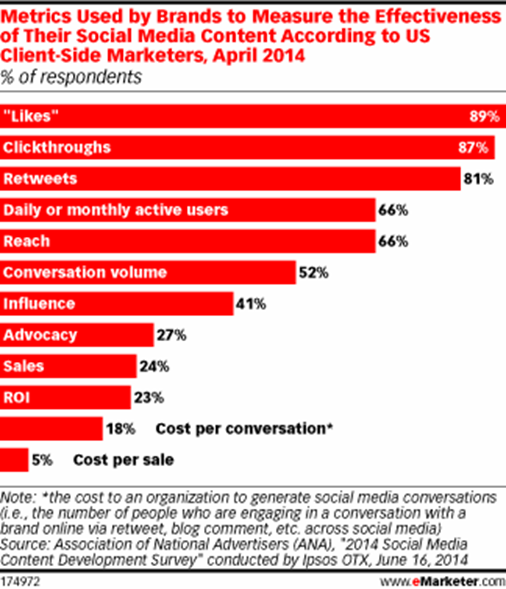 According to the research, 80% of US client-side marketers measured the effectiveness of their social content, with social media metrics such as “likes”, meanwhile usage statistics fell to the middle of the list and metrics that could identify business ramifications were not used nearly as much, with financially based measurements such as ROI and sales landing near the bottom.

In addition, ANA noted that many marketers were still using soft metrics vs. solid metrics, indicating further room for growth. 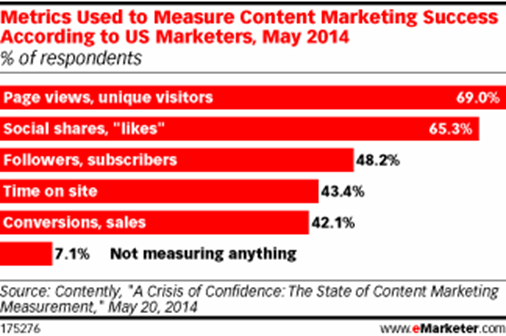 Besides that, May 2014 polling by Contently found that these soft social metrics weren’t just common for measuring content on such platforms—they were also among the most popular ways marketers were measuring content marketing success overall. Nearly two-thirds of US content marketers said they used social shares and “likes” to determine success, the second most popular metric. Conversions and sales fell at the low end again, cited by 42.1%.

On the other hand, to take up the headlines of the week, social media networks know well how to earn their bread and butter and analyze data as much as they can. Facebook just released the results of a study where its data scientists skewed the positive or negative emotional content that appeared in the news feeds of nearly 700,000 users over the course of a week in order to study their reaction. The research caused a great stir and discussions, but since Facebook’s primary business is advertising, their recent study is absolutely in line with FB’s interest in order to stay in business.

Considering that the very point of ads is to influence emotions and behavior, it’s actually a marketer’s duty to use data and psychological insights to achieve good results. Just consider that the news feed isn’t a product that’s somehow “neutral,” but created with a particular goal in mind as well.

Besides, given the fact that a large amount of content on Facebook is already highly personal and emotional in nature, it seems very hard to argue that Facebook did intrude its users’ lives, but let’s talk more about that and the flip side of the story later this month.