Understanding the mobile revolution: it’s not about technology 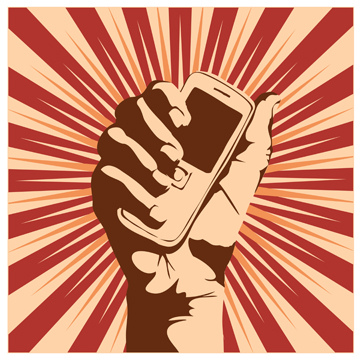 Apple’s recent high-profile launch of the iPhone 5 at the Yerba Buena Centre in San Francisco garnered a lot of media attention – and in the process, revealed quite a bit about the current state of the art in the mobile space. Some Apple fans were disappointed, for example, because the newest iteration of the iPhone has no ground-breaking differences from its previous version. Others pointed out that a larger screen, lighter form factor and longer battery life were difference enough.

The spate of similar launches in previous days had mostly gotten the same sort of stories in the tech press. Nokia’s launch of two phones was troubled, at first, by criticism of the non-existent Windows 8 platform, and then later by accusations that Nokia had faked video footage and still photographs for their PureView camera. Motorola’s RAZR launch was the trigger for a conversation surrounding the future of the Android operating system in general.

A lot of mobile press coverage is devoted to tech details, about phones and features, about operating systems and compatibilities. The result is a great deal of conversation and commentary, from supporters and detractors of various brands (whether OS or hardware) and while this all makes for excellent press and great amounts of online activity, it perhaps misses the point.

The people who are the most involved in these discussions are tech aficionados, people who enjoy technology (and talking about technology) to a much higher extent than the average person. These are the people who you go to when your technology is misbehaving, and who can spend hours poring over pages of technical specs and working out the implications and intricacies of every new product release. These are the people who would stay up all night to find out exactly what Apple was launching on September 12, and stayed glued to their screens following the events via live blog.

But the bulk of mobile users do not fall into this category. The great wave of mobile phone subscriptions in Asia was driven not by people with a taste for tech, but by people who were hungry for more and better communication, looking for a way to get to the digital information riches of the Internet. For them the technology is merely an enabler, the platforms merely a matter of choice.

The 900 million mobile subscribers in India, for example, include 36 percent of rural subscribers, many of whom do not even have landlines. In the early 2000s, the Philippines was known as the “text capital of the world” because of the volume of SMS messages sent. Mobile phone shipments in China exceeded 40.9m in August, with home-grown brands taking the lion’s share (77.7 percent) in the first eight months of 2012.

These facts tell a different story to what we see in the tech press. There is a growing number of mobile users in Asia who are tech-savvy, without being tech-obsessed, and who use mobile devices freely and comfortably, without concerning themselves with the specs and the fine details of the technology. They are largely driven by the need and desire to communicate, the same need that has propelled the rise of social networks online. They use their devices to access their individual social graphs, and are looking to do more with their mobile phones.

While once these users might have looked to the United States for innovation, enterpreneurs are already hard at work creating mobile services with a local flavour, tying up with businesses to give mobile users what they want. Mobile marketing, too, has taken national and regional social mores into account. Take, for example, the CondomCondom campaign in India which used a musical ringtone to acclimatise people to hearing the word, and to help make condom less of a dirty word.

The true revolution, for Asia, certainly, will not be one that is based in technology, but instead is based in actual utility. Already marketers are focused on using their skills as storytellers and communicators to create opportunities for brands to engage with consumers in a space that allows for information to flow in two directions, not just one. Consumer-centric marketing may seem to be a buzzword, but it reflects the same kind of human-to-human contact that has been the basis for much successful marketing in the past.

Marketers who set out to move consumers will be the ones who reap the benefits, and it is the emotive connection to brands that will fuel loyalty more than any offers or discounts, more than any high-tech chrome-covered gadget.